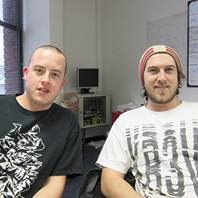 The Visual Drop is a collaboration of two professional airbrush/street art artists who came together to carry out a big project and decided to join forces and set up a business partnership. Outset was there to give them a helping hand.

Swindon–born lads James and Ed had both enjoyed doing street art as a hobby over many years, initially doing graffiti but eventually generating an income from ad-hoc jobs. Ed worked as a satellite engineer and he still has his own business doing installations at weekends. James left the Army in 2008 and got a job as a welder, which led him to work on skateparks and opened up a whole new market for his street art.

The breakthrough came when James and Ed won a major contract to decorate the walls inside the Rush Skatepark in Stroud, creating one of the largest indoor murals in Europe. This generated a lot of new opportunities for them so they decided to formalise their partnership and set up The Visual Drop.

They found out about Outset Swindon through an internet search and contacted the office to see how Outset could help them start their business. Because of their work commitments they were unable to attend regular workshops, so they took advantage of the flexible approach offered by the Outset programme and had a series of 1:1 meetings with Outset Swindon’s Finance Advisor Geof Thornton.

“They have helped us to create a business plan as well as showing us how to start a business and become more business-minded. The staff are very helpful and the venue is a very comfortable and friendly environment.”

The Visual Drop specialises in producing art and design works in the form of large scale murals and signage, and custom airbrush work on vehicles, musical instruments and sculptures for individuals, businesses and charities.

The company’s goal is to provide a high quality professional service that is hard to source elsewhere. Customers range from individuals to small businesses and big brands, such as Monster Energy, Superdry, Extreme Sports, Bell Helmets and Veho.

“Transforming surfaces and objects as a business has enabled us to work with some well established companies and amazing projects and we plan to build on this.”

James and Ed also appreciate the opportunities offered by Outset to network with other businesses and key stakeholders in Swindon. They had a stand at the Building Business Connections show that the Outset Swindon team organised during Global Entrepreneurship Week in November 2014.

“Outset have helped us to focus our attention on our stronger business prospects, as well as inviting us to attend networking events which has introduced us to clients in the local area.”

Their current goals focus on raising their profile and expanding the business by winning more local contracts. “Our biggest challenge has been creating more local business as the majority of our work has been based around the UK and requires a lot of travelling and expense.”

This is starting to pay off and their work has brightened up local businesses such as The Flower Factory, various shop fronts in Swindon, and the Eat Wild restaurant in Cirencester.

Their longer-term goal is to turn the company into a recognised brand, reach out globally via the internet and eventually create an agency to provide training and employment to other artists and designers.