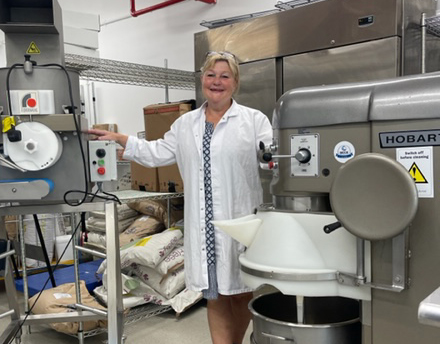 Caron’s business story started by making and selling delicious cakes from her tea shop in Chichester.

The bakery side took on a life of its own, becoming a highly successful multi-million-pound enterprise, at one stage employing 135 staff and supplying major supermarkets and coffee shop chains.

But after many years in the corporate world, Caron wanted a change of direction. She decided to get back to basics and start again in her own kitchen making scrumptious cakes for a local garden centre. Then one day a very good friend who owns Humbledough, a plant-based cookie company in London, suggested Caron set up a new bakery business to supply vegan cookies for them.

A great idea – but how? Initially Caron was reluctant to start another bakery from scratch and she did not have much money to invest. She called Portsmouth City Council to find out whether business grants were available, and they introduced her to Outset Start and Grow.

Caron joined the Programme and met Robert Bentley, Business Growth Advisor at Outset Start and Grow Portsmouth, who explained the grant funding and helped her secure new premises to start the bakery.

His advice led Caron to a great location for her new family business:

Robert suggested starting with one of the enterprise centres owned by Portsmouth City Council, which offers units for light industrial and office use on a month-by-month basis. That way I avoided needing a huge financial commitment up front. I went to Victory Enterprise Centre and there was one unit left and it was the perfect size! I acquired the premises and with the help of the Council I built the bakery to comply with food safety standards.

Outset Start and Grow awarded Caron’s new business £19,948.23 in grant funding towards the costs of building a decent kitchen with new equipment including a large walk-in fridge, freezer, an oven, storage racking and mixers.

This was everything Caron needed to launch ‘A Little Bit Extra’ as a new bakery business with a strong future ahead:

I wouldn’t have had the money to start the bakery up professionally without the Outset grant funding. I could’ve taken on the unit and managed to afford some second-hand equipment, but it wouldn’t look like a credible business. The Outset grant enabled me to hit the ground running with the opportunity to attract large clients and grow the business from the outset rather than start small supplying a couple of local shops.

As well as access to grant funding and 1:1 business support, Caron attended enterprise training workshops run by Outset Start and Grow which proved a real help.

“I’d already started and led a large profitable bakery, so I had experience and knew how to write a business plan and build a cashflow but having said that – it was a long time ago and I had staff who led my finance for me.”

“The Outset Start and Grow training workshops were very useful. They enabled me to get back to basics and return to being hands-on with the business.

The business advice has been really helpful. I can pick up the phone and say, Robert – what do you think about this? Does this look right? And he’ll help. It’s great to have someone who’s objective to bounce ideas off and check that you’re on the right track”

In addition to the grant funding for new equipment, Outset Start and Grow helped Caron access a bursary of £5,000 to fund one FTE for three months. This enabled her to recruit and train her first staff for the bakery.

Caron said this was a huge boost for her business:

“I’m now employing the equivalent of six part-time staff, which is fantastic. With a new bakery, you must buy all the ingredients, recruit and train your staff and pay their wages before you’ve shipped your first order. The funding allowed me to bring two part-time people in and train them with the luxury of a little bit more time for them to learn on the job before the pressure is really on fulfilling big customer orders.”

Caron is still baking cakes for the local garden centre, but she no longer does it from her home. She has moved all her operations to the new bakery and has many more exciting plans in the pipeline.

“A Little Bit Extra is a business that will grow. Humbledough is a successful vegan enterprise with two cookie shops in London and we have a roll-out programme with them to supply cookies into a large coffee chain. We’re going to be making three cookie lines for them – two vegan and one non-vegan.”

Find out more about how Outset Start and Grow can support your business to get off the ground or reach the next level.